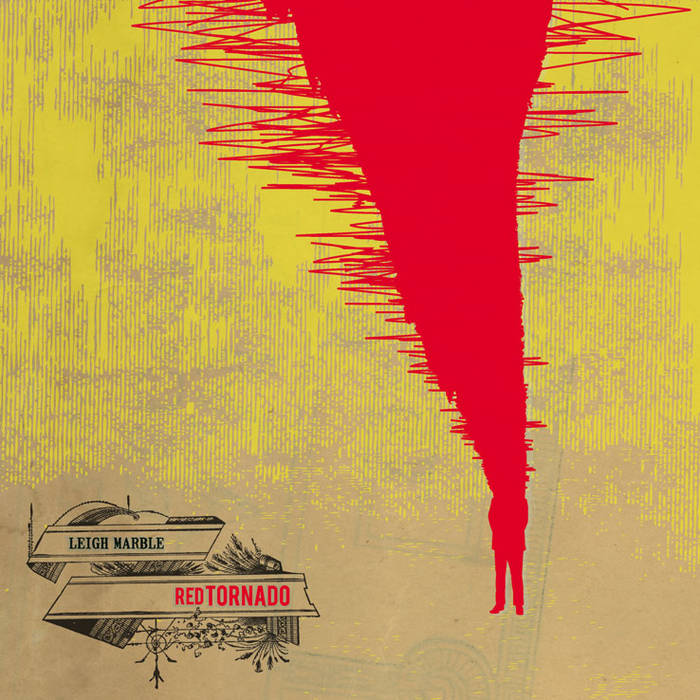 With his second album, "Red Tornado", Leigh Marble set out to make an record with more dirt, sweat, and human interaction than its predecessor, "Peep". "Red Tornado" is a descriptor of the emotional state that each of these songs came out of, whether it be depression, frustration, or high anxiety.

Whether it's album opener "Lucky Bastards", a song about ambition and poisonous envy, the American dream vexed to nightmare by the vapidity of pat aphorisms, or "On Your Way", a kiss-off song to a friend full of high ideals and low standards. Or "Salt In the Wound", a song Marble describes as "a memoriam to a number of slow-suicide cases I've known in Portland." "Maybe I would have called the album 'Blood on the Tracks'," he laughs, "Except somebody, I think, used that already."

Track Name: Lucky Bastards
There's a long long list of all I haven't got
And lucky bastards who should all be shot
Now every corner's been taken, gotta find a new room
Don't say you don't cause you're scared cause it's all over too soon

Knowing the score means knowing what worked before
And being at bat means put your back into that
The rats they are gnawing me to shreds
From coast to coast, in a thousand beds of

American dreams that I had last night, they were bad dreams
The American dream i had last night was a bad dream
Track Name: On Your Way
You took me for granted, stepped on my face
It came as a surprise, I couldn't save it if I tried
Not even to mention what became of my heart:
Battered and fried but I don't even mind if you're leaving,
Just get me another drink on your way

You gave little gifts and then took them back
I don't even imagine it was your plan of attack
But your cold M.O., easy come, easy go
Ce'st la vie, sailor girl, there's ports of call a callin' hey
So get on your way!

A guitar case of photos to the untrained eye
But each one's a trophy of a different guy
I don't blame you, playing the gypsy -
Some freedom that eluded you in Chicago town
Now you drive across praries to swim naked in the ocean
Just you, your car, and another day
And you're on your way.

Tending bar in a Texas town,
Thinking about if you're settling down
Or settling for less, if the answer's yes
Then fuck it all, and tuck it all into your pockets
And grab your keys, stick to the plan,
I don't care you cut me loose, just live up to what you say...
And get on your way!
Track Name: Salt In The Wound
Cried on my shoulder and threw up at my feet
Then you knocked your poor head home down Division street
Where songs left undone rattle in your head
You can't sleep in peace, you gotta pass out instead

They're gonna hate you, no matter what you do
Berate you before your bit is even through
You're gonna hate it no matter how you sweat out
Every last little detail, so you just cut it quick and you get out

Was it too little or too late?
When you finally awake
From dreams of your design
That made up your mind

Was it too little or too late?
When you finally awake
From dreams of your design
That made up your mind

If you've played long-distance, you've played fast & loose
Seen the engine wrap around, to hit the caboose
And heartstrings left untied get torn in two
Track Name: Baby Ruth
I'm sitting watching out the window,
Wondering what exactly I know
When you act strange for no reason
And turtlenecks are out of season...
Then I see you coming from a block away
Wiping the lipstick off your face
Please don't kiss me when you cough
You didn't quite get it all off, so

Thank you for telling me the truth
But it's not what I expected, baby Ruth

When I pulled back from our embrace
I could see it written on your face
I knew then you had the upper hand
And your little slip-up suddenly seemed sorta planned
I said, babe it looks like you missed a spot,
You said, "I thought I'd feel guilty but I just feel hot
I waited years for this, it just happened one day"
I said, I know better than to stand in your way, so

Thank you for telling me the truth
But it's not what I expected, baby Ruth

I'm sitting watching out the windshield
Low on gas, so I've got my eyes peeled
For any sign on the horizon now
Any hint of an in or an out,
While you're at home doing god knows what
With god knows who and all I've got
Is this ring on a chain, with our initials inscribed
Swingin' from the rearview, cause now the score is tied, so

And it's so far, so good, but so far away

I came to you hungry, but came away
With mouthfuls of disappointment
I wanted the salve, maybe salvation
Only got a fly in my ointment.
Once you start talking you don't stop for breath
Telling me how great is your new life
And I don't mind listening, but I sure miss
Seeing some rapture in your eyes
And now we walk under different skies

And it's so far, so good, but so far away

So who are you foolin' with that kind of face?
I have always been open with you
And my open eyes have got a big open mouth
So don't pretend that you don't see it too.
Now everything gets stretched a little thin
This town can see right through my skin
They say, man you got guts
But I don't know if I can hold them all in
When you're as far as you've been

And it's so far, so good, but so far away
Track Name: Get Yours
One night a girl showed up on your couch
Just passing through for a place to sleep
And you saw what you'd been denied
And you thought that you would just take a piece

So you reached out and grabbed, put your hand on her mouth
And turned from her face while the lights went dark
When it was over and done, it hadn't even begun
You spent it all just to make your mark

No cop, no jury, no judge, no prison
Will ever come close to you
Untouchable, you think, but every bad thing
Comes back in twos

Well I think if I jumped, you'd catch me
But I am no cannonball clown
And even though I would probably pull through fine
I'd sure look like a fool on the way down

The big words never made it out of my quiet little mouth
And it's clear you are confused exactly what this is all about
I strung along my words, but the breadcrumbs blew away
And now it's late, and you're leaving,
Unless I've got something else to say
Track Name: Gave It All
The subtle subtext, lost in the fray
Another friend now gone by the way
Did you know I gave them all up for you?
Did you know I gave it all up for you?

You were right about half the time
But you couldn't get the truth to fall in line
Your directive, a detective
Sworn to uphold the facts, at all cost.

Now the subtle subtext gets lost in the fray
Another friend now gone by the way
Did you know I gave them all up for you?
Did you know I gave it all up for you?
Track Name: Stakes
Every year the stakes got higher as the well got drier
Looking back now, each year withered before half-passed
Then your face appears, knocks me flat, steers me right off track
Oh to be where you are again

So you can have your capital A-merica,
Make hay while the sun shines, and swerve across the dotted line
To meet your maker on a Mack truck,
Seek and find only what's in your mind.
You bless your tunnel vision like you kiss the cross of Francis
And keep your version of the events
Just until your boy repents

My heart dropped out to a bottomless pit and the pendulum
And it's too late to stop now, oh no sir
Every time you curse my name, the blade drops a little bit closer
And if your name is mud, then at least you know the lay of the land
But I think that you contain me, it's plain to see,
You could cup all of this in your hand.

Last time I saw you, you were looking back at me through your legs
And I think that was our problem, trying to match
Round holes and square pegs
And we're killing, killing love, oh my dear we're guilty as sin
But even if we fucked it up every time, I'd sure like to try, try again